Whether you need advice on a particular aspect of training development, or an end-to-end solution, Level Up Learning will work with you to design the best solution for your needs.

We’re a team of seasoned professionals who have chosen to come together out of our passion and shared respect for good training.

As victims of bad, boring training ourselves, our mission is to make a difference in this industry for you and your learners!

We bring together a diverse set of skills and experience to produce clever, creative solutions that are usable, useful and simple. There’s no nonsense with us - we just want to make training that works.

We actually give a damn. We want to develop the best solution possible for your needs and we want to be proud of what we do.

Regardless of the size of your business, we can help you develop your people in the following ways:

We have expertise in designing and developing a wide range of bespoke learning solutions, including:

Should you only need help with a particular aspect of training development, our team can offer services in needs analysis, concept design, storyboarding, content authoring, user experience design, graphic design, development and implementation.

We can analyse performance problems within your organisation and develop the right strategy to ensure you get the most out of your training. Our specialisations in this area include:

If you’re looking to start your own learning and development team, or are wanting to upskill existing teams in-house, we have a wealth of knowledge and experience we’d love to share with you. We can provide coaching and workshops in these areas:

How we do it

After nearly a decade in the industry, we’ve worked on all sorts of projects, with all sorts of clients - including corporate, government and academic institutions. We know what it takes to create training that really works - no matter the audience.

And here’s our formula...

We appreciate good, clean design and know there’s nothing worse than paying for something that’s hard to use. That’s why we strive to make all our solutions user-friendly and easy to understand.

When it comes to creating useful training, we know practise makes perfect. Because people learn best by doing, we combine a skill-centred approach with our passion for storytelling to develop lively and compelling training that allows learners to practise new skills and transfer them easily to their jobs and real life.

No gimmicks and no unnecessary fluff. We know the best way to increase retention and create long-term change in learners is to strip everything back and only include what is relevant and interesting.

Only 10% of learning occurs in formal training with the other 90% happening socially and on the job. We target this other 90% by creating tools and solutions that promote social learning and provide learners with on-the-job support to complement what they’ve learnt in formal training.

Years of experience have allowed us to streamline and perfect our process for developing training, ensuring your solution is delivered on time and within budget. Our process maximises collaborative partnerships with you and your learners to gain key insights into your world. This allows us to create truly meaningful and tailored solutions.

To create the perfect solution for your needs, we first have to discover what those needs are. We do a complete analysis of your requirements and the goals of your organisation, any performance problems at hand, the outcomes you need from the training and the characteristics of your learners. We also look at other contributing factors like workplace culture and environment.

This is where the team’s creative forces come into play. Having now gathered all the requirements, we set to work on designing the learning experience. A lot of brainstorming, conceptualising and storyboarding goes into this phase. Depending on how complex your learning design is, we might test it on some of your learners to make sure it works.

This is where it all comes to life! The actual content creation and technical development (if required) happens in this phase and is delivered in two parts - the alpha prototype and the beta. This two-part process allows us to test and refine our solution to ensure everything is perfect before handing over the final product. This is an extremely collaborative time and can involve multiple rounds of user testing and opportunities for you to provide feedback.

Once you’re happy with the final product, we can send it live! We love getting feedback and want to make sure you and your learners are getting the best out of the solution we’ve delivered. For this reason, we like including some form of evaluation in this phase of the project for every solution we deliver.

Here’s a taste of some our recent projects

Which Way Would You Go?

Our client approached us when a governing body had mandated they their train staff in ethical decision making. As we discovered quite quickly, addressing workplace culture was a huge aspect of this project, in addition to addressing a lack of skills in making ethical decisions.

Although it was an external body that mandated the training, we wanted to create something that made a difference and wasn’t just about ticking a box. We worked with various stakeholders in the organisation to uncover the top five issues they were facing with ethical decision making and breaches of their code of conduct. These would become the focus of our solution.

Because workplace culture formed such a huge part of these issues, we knew that training alone wouldn’t be enough. With our guidance, the client also developed an awareness campaign to complement the training. We knew the best way to address cultural issues in this instance was to use real-life stories to demonstrate the consequences of making unethical decisions. So, using scenarios and case studies based on the top five issues became the method of delivery across the campaign and within the training.

In addition to this, we developed a framework and set of tools for making ethical decisions. These tools would be used by staff on the job to help them make good decisions in tricky situations.

The training, delivered online, allowed learners to practise using these tools through a series of realistic scenarios and case studies. The learners were able see the consequences of their actions - further adding to the learning experience and the changing of workplace culture. We also styled the training with comic-book style illustrations and layouts to portray the drama and emotion needed to make the training even more engaging and compelling.

The training was received extremely well - by the client, the learners and the governing body.

More than 10,000 staff have now undertaken the training and over 80% of survey responses have been positive. 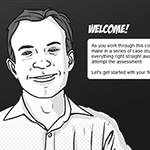 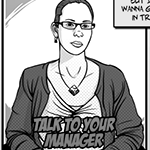 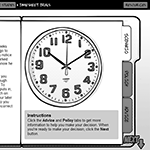 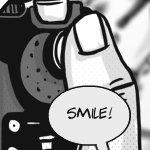 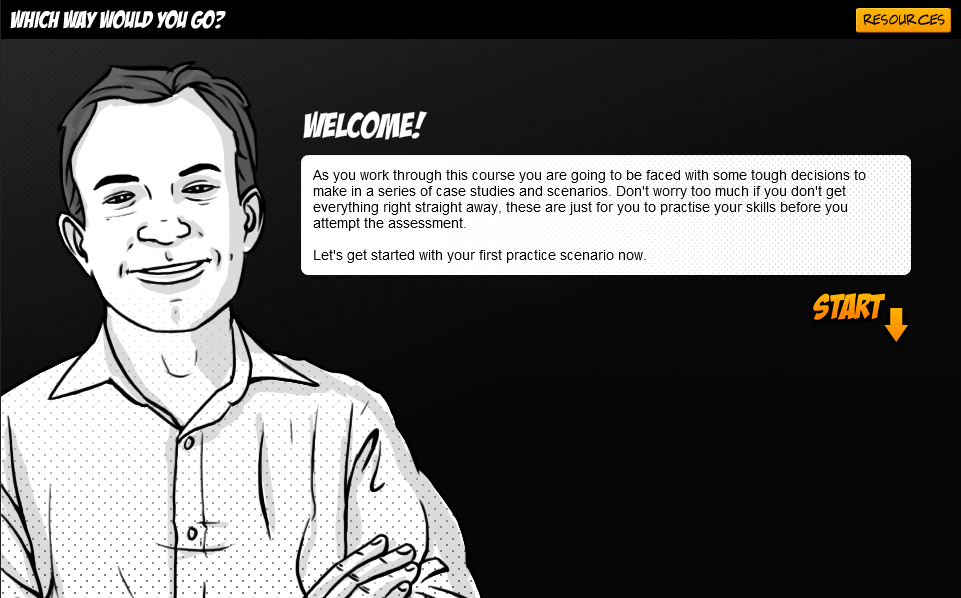 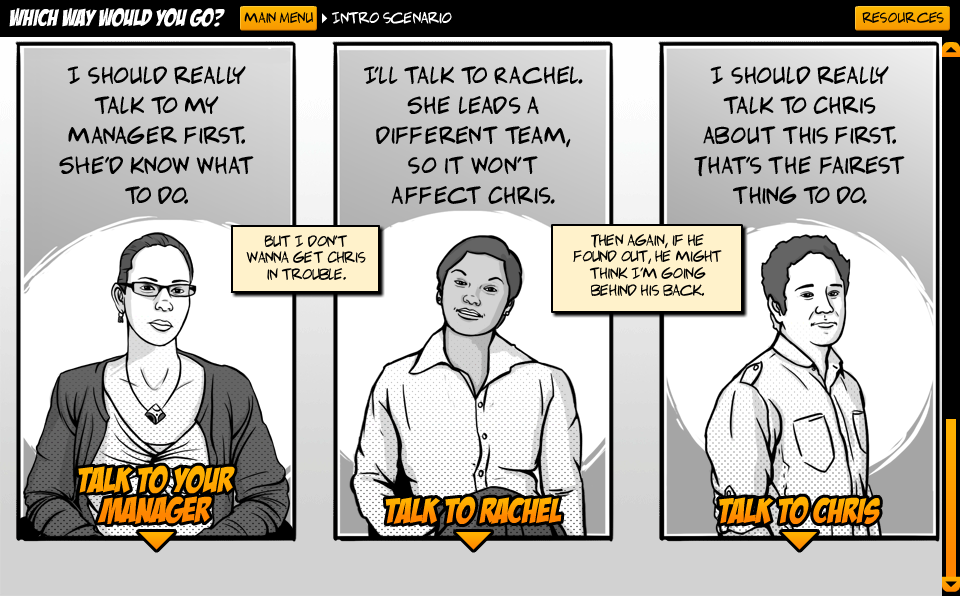 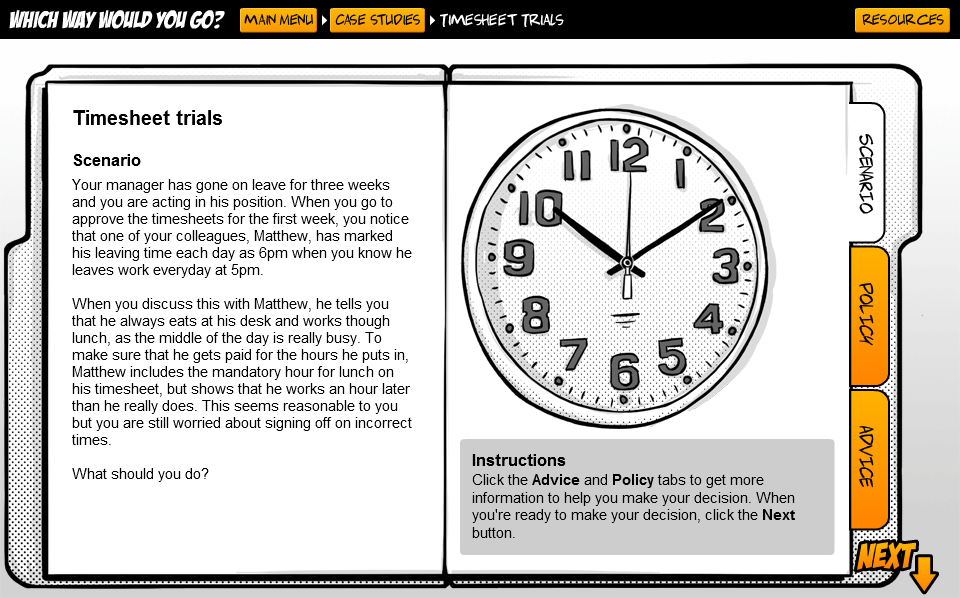 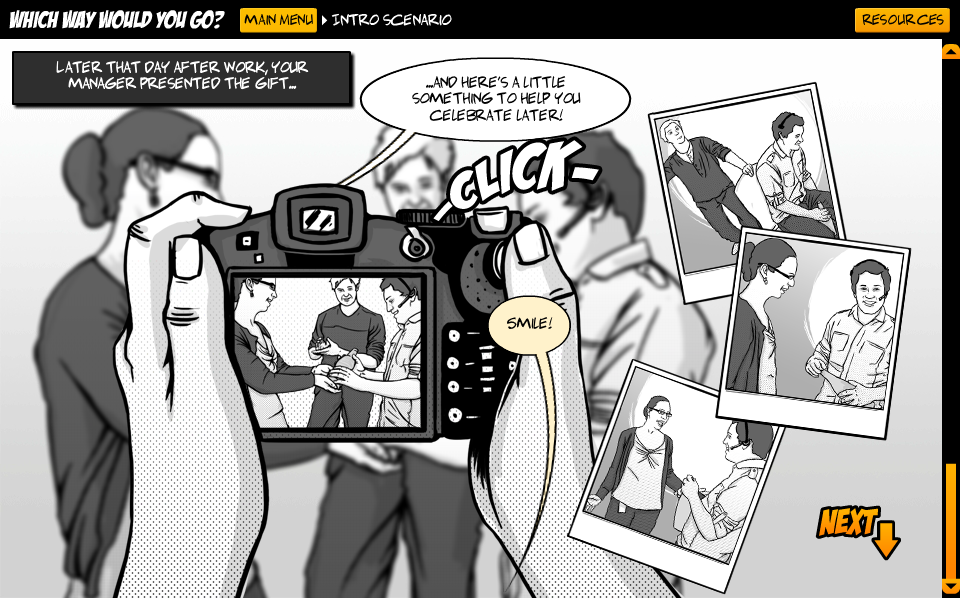 The challenge for this project was to develop training in the application of WH&S principles to help our client reduce workplace incidents by 50%. This training would target office-based workers who occasionally needed to visit construction sites. The client had existing WH&S campaigns and tools in place, so it was important that branding and key messages in the training were consistent with them.

By working very closely with our client and their learners, we found most incidents were caused by not identifying and resolving hazards properly. This became the key focus of our training.

As the client needed to target a large number of staff who were also geographically dispersed around Queensland, our solution was to develop a self-paced online course that would be hosted on the client’s LMS.

The course featured three highly-interactive and realistic environments (including a construction site) in which learners could explore and practise their skills identifying and resolving hazards. One of the key tools our client was currently using - ‘Stop, Think, Go’ - was integrated into the process of the learner identifying and resolving hazards to tie in and support the existing campaign.

Learners could experiment with different options for resolving hazards to see the outcomes of each. Only when the learner chose the best option were they debriefed on why that option worked best. This encouraged exploration and a deeper understanding of the concepts.

We also created a series of job aids to complement the formal training that could be used by learners to identify and resolve hazards on the job. These job aids were also a great opportunity to reinforce some of the key messages featured in the existing campaigns.

The training was well-received by both the clients and their staff, with overwhelmingly positive feedback coming through in the post-course evaluation. The organisation is also well on its way to meeting its targets in the reduction of workplace incidents for this year. 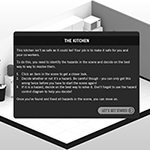 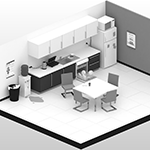 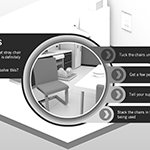 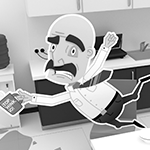 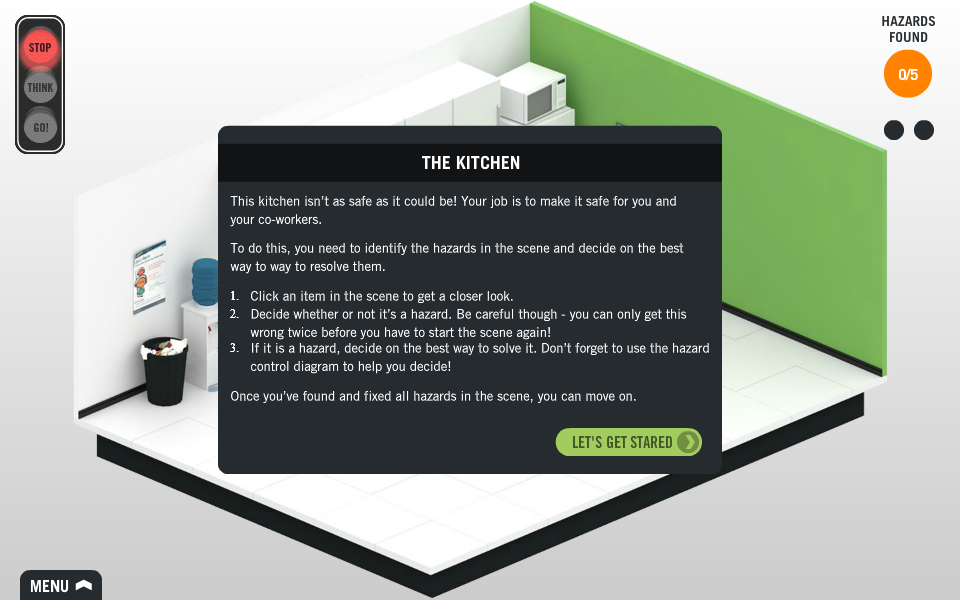 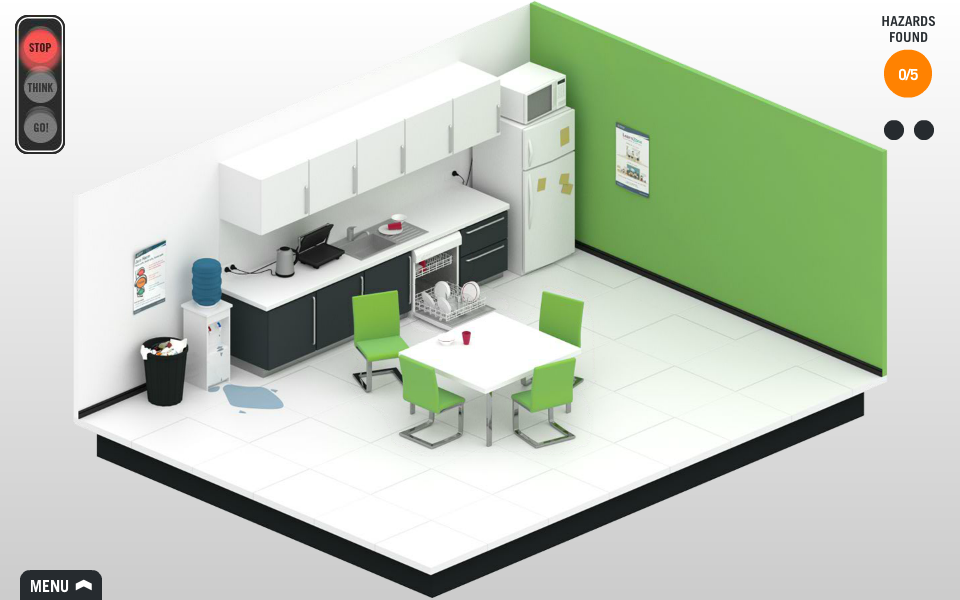 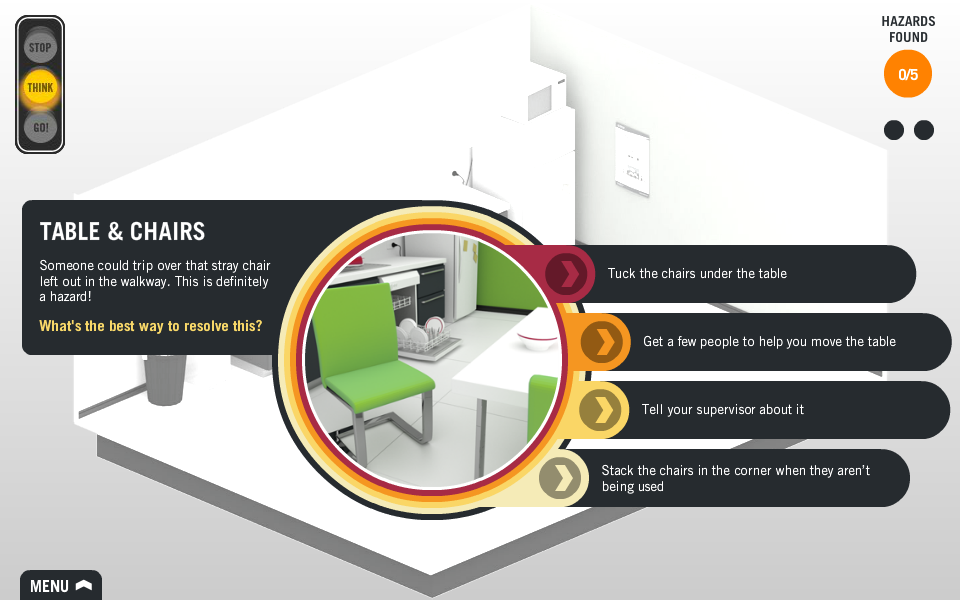 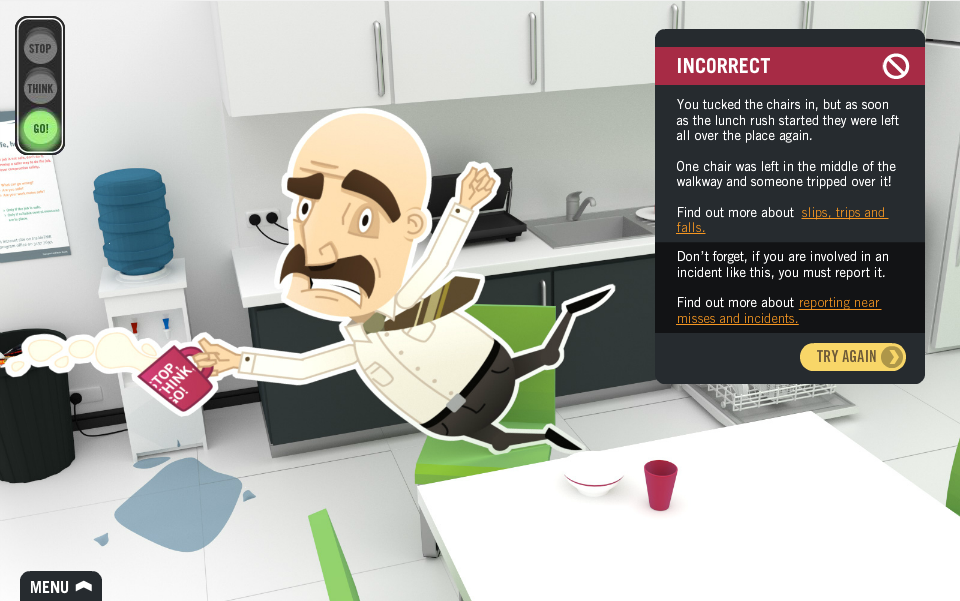 For this project, our client wanted a holistic strategy to address issues they faced around the cultural competence of their staff. This project differed slightly from usual in that the client wanted a strategy they would implement themselves, as opposed to needing a solution we would implement for them. Our client had an extremely diverse workforce - in ethnicity and also in terms of role types and workplace environments.

This project required a very detailed and comprehensive needs analysis. We worked with the client closely to determine the outcomes they required from the strategy, the current forces at play within the work environment and the specific characteristics of their learners. Our findings showed the organisation was facing significant workplace-culture issues, along with a lack of general awareness and the skills required to work in a culturally diverse workplace.

Our solution targeted these issues with a three-part strategy:

The client was extremely happy with our comprehensive approach, stating that it was very clear what they needed to do to implement the strategy and ensure its success. The organisation is currently implementing the strategy which has been well-received by staff so far.

At Level Up Learning, our number one priority is our customers and their learners. We pride ourselves on our level of customer service and see this as a main point of difference.

What you can expect from us

Tell us how we are doing

If something happens that you like or don’t like about our service, let us know. We want to make sure your issues are heard. You can tell us in a way that suits you.

We’re always on the lookout for new teammates, so if you’re as passionate as we are about creating clever solutions that work - let’s join forces!

Send us your CV